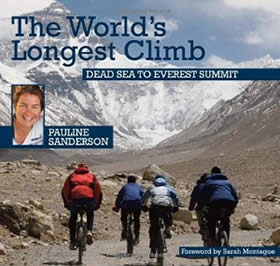 You may be wondering why a book about a group of people cycling and climbing makes it to our list of books about leadership.

I’m not normally one for taking the world of sport and adventure and trying to craft parallels for the world of business. But this book is a great metaphor for all our struggles and achievements.

For me, leadership is about being successful whilst also creating success for others. It’s about having an impact, personally, for the group, the organisation and on society. Leadership is about achieving your vision, your dream, your goals, and yet, it’s only leadership when the impact is wider and when it takes others to achieve it and for them to achieve their own goals.

This book is a wonderful story about teams, about dreams, about success and failure, and, interwoven throughout, about leadership.

Not hierarchical, hero leadership, but about a team, where leadership flows naturally to the person best placed to take on the mantle.

Pauline was one of a small group who cycled from the lowest point on land, the Dead Sea, to Base Camp at Everest and then climbed to the summit. She became the first woman to do this and, with her husband Phil, they were the first married couple to summit Everest. On the way, they faced many challenges – not least crossing a few countries where the Brits were not the most popular people.

The journey itself was amazing, and the story of Pauline’s life that led up to the trip was just as fascinating. There’s a theme in there of going for the dream, however unconventional it may seem.

How many people do we know who are uninspired in their job, but stay there for fear of the alternative? Or even, those who have good and interesting jobs, but their dream is even bigger and wilder than that?

Here’s a great example of a person who was prepared to take the risks and go with their dreams. For me, because of the impact this adventure has had and will continue to have, it’s leadership.

It’s also a story about relationships – within the team and also with the people they met. That ability to use emotional intelligence to build rapport and gain influence – important qualities for any leader. All through the trip, they played games with local kids and brought fun and laughter with them. When they entered Pakistan, they organised an impromptu cricket match to win over the border guards, who escorted them through the most dangerous parts.

The team bonded through humour and through overcoming adversity – steep climbs, appalling weather, equipment breakdown. They had a shared goal and saw possibility, rather than problems and barriers. They were all very different people, but played to their strengths and valued their differences.

Then, at Base Camp, the team had to integrate with the climbers – tough, after months together on the road, but vital to gain trust for the team to work well together for the ascent. The story of the ascent itself is moving, scary, emotional and thrilling. T

Here’s also a great story about what is often called point leadership – the person who makes the decisions may not be the nominal leader. Pauline has a disagreement with the group leader and, to me, demonstrates the real value of letting people take responsibility and ownership.

I mentioned the ongoing impact – any leadership story has an impact in the moment and it lasts. As well as raising money for charity during the trip – Merlin, SOS Children’s Village and Practical Action, Pauline is generously donating 50% of the profits on the book to charity – so go buy it now!