This is some blog description about this site 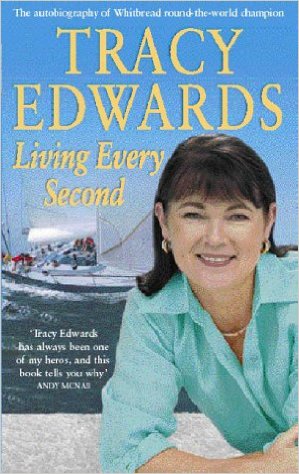 Living Every Second is the autobiography of Tracey Edwards. Tracey captained the first all women crew in the longest toughest yacht race in the world. She sailed a boat called Maiden in the Whitbread Round the World Yacht Race in 1989, while still in her early 20s, breaking records on the way

I’m not always a fan of those inspirational speakers who tell you about a story in their lives and say “Come on you can do it”, or the sports stars who turn into public speakers and say that if only we were more like them, if only we had their dedication, then we too could achieve great things. People like that are usually driven in a way that the average employee is not. However, there are inspirational stories out there, and Tracey’s is one example of those where we truly can learn.

Tracey suffered personal loss at an early age and became a rebellious teenager, being thrown out of school various entertaining misdemeanours. With all the enthusiasm of youth she went to Greece ended up cooking on a boat and very quickly picked up navigating skills and learn how to sail.

JC manages to secure a whole series of jobs on various boats around the world boats. The way she writes about it, it seems she is looking. In truth, Tracey clearly has the ability to win people over very quickly, up to and including King Hussein of Jordan! It’s a great example of people now seeing the skill and talents that come naturally to them

Tracey serves as crew on a boat doing the Whitbread race and is so captivated by it she is determined to enter the race with her own crew in four years’ time when the races run again – and the crew will be all female. The story continues to entertain as she describes the challenges of succeeding in a very male dominated environment.

Despite fierce opposition, sexism and criticism, Tracy and her team not only reached the start and raced around the world, they won two of the toughest legs and came second overall

There’s much more of the story to follow and I encourage you to read it. There is inspiration here. Ordinary people doing extraordinary things. And women succeeding in a male dominated world

The Five Dysfunctions Of a Team - Patrick Lencioni

This book has been around a while now: first published in 2002.  So a very fitting choice for The Forton Group to review in this, our 15th year of being in business.  It's described as a “Leadership Fable” and, I have to be honest, that put me off. Other books in this same genre have come over as being just too cheesy for me. However, it was recommended by someone I trusted, so I persevered. I quickly found myself absorbed into the story. The characters were plausible and the scenario terribly familiar!

The Myth of the Strong Leader by Archie Brown

This is a fascinating look at leadership in the political world, spanning democracies and authoritarian regimes, and exploring leadership in many contexts. The lessons to be learned and the parallels to the world of organisations are many and varied.

The book opens with a useful discourse about the quality of strength and why it seems such a common property we want to ascribe to our leaders – how often do we say we need weak leadership? There are many qualities that political leaders need above and beyond the ability to look strong.

You can listen to a facinating interview with Archie Brown below:

Selling to the Point by Jeffrey Lipsius

The big question is: why should an organisation specialising in leadership development review a book on sales? Yet, as Dan Pink points out “To Sell is Human”. And every leader needs to develop their influencing skills; selling ideas; untrodden paths; new frontiers for the organisation.

This book introduces a radically new approach to sales – based on the simple premise of focusing on the buyer’s need to buy; not the salesperson’s need to sell.

Ripple – a field manual for leadership that works, by Chris Hutchinson

Chris Hutchinson is an organisational coach and leadership expert. More importantly he’s a pragmatist who fights against over-complication and poor systems. Chris set out to create a framework for leaders that helps make things better; one that stops people feeling talked down to by so-called leadership 'experts'.

In the interview he talks about he started with the metaphor of the game of marbles where one ‘big-hitter’ directs the smaller marbles. This shifted to the more expansive metaphor of the ripple – which became his big idea.

You can listen to an exclusive interview with Chris, below.